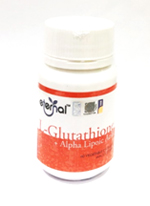 L-Glutathione (GSH), a miraculous tripeptide (three amino acids) which comprises of cysteine, glutamic Acid and glycine is probably the most important cellular defense that allows the body to prevent and fight infections and disease. It is the body's essential health aid - antioxidant, immune booster and detoxifier. No other antioxidant is as imperative to overall health as GSH. Without it, your cells would disintegrate from unrestrained oxidation, subsequently, your body would have little resistance to bacteria, viruses, cancer and your liver would shrivel up from the eventual accumulation of toxins.

Alpha-Lipoic Acid (ALA) is a fatty acid found naturally in the body and also known as lipoic acid and thioctic acid. The structure of the lipoic acid molecule is an eight-carbon dithiol compound. Because of the two thiol groups, it is a powerful antioxidant. These thiol groups are very good at accepting free radicals and neutralising them.

ALA is soluble in both water and fat; hence it is able to cross the blood brain barrier. This property enables it to enter all parts of the nerve cell and protects it from damage. It is needed by the body to produce the energy for our body's normal functions as ALA converts glucose (blood sugar) into energy too.

Eternal L-Glutathione (GSH) and Alpha-Lipoic Acid (ALA), why the combination?

L-Glutathione (GSH) is one of the main antioxidants your body naturally produces while Alpha-Lipoic Acid (ALA) is a powerful supplement to help prevent oxidative stress. Hence, Eternal L-Glutathione and Alpha-Lipoic Acid combines the goodness of GSH with ALA, an energy producing nutrient. The addition of ALA further enhances the production of GSH, which is very important in the cell’s ability to bind to and dispose of excessive and potentially damaging metals such as arsenic, copper, cadmium, cobalt, iron, lead, mercury, and nickel, thereafter, increases our ability to detoxify from pollutants and toxins.

The body’s benefits from the GSH increases significantly as it is utilized in every system in the body, especially the nervous system and the immune system. GSH is needed for DNA repair, protein synthesis, transport of amino acids and in enzymatic reactions. As ALA promotes and enhances GSH levels, it too is important for the function of all systems including the nervous and immune system. 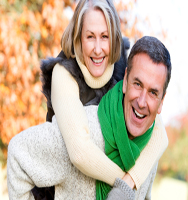